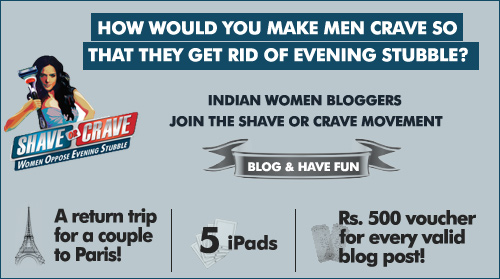 This post is a part of the 'Shave or Crave' movement in association with BlogAdda.com

All the women in the world always love to have smooth skin and on occasions women endure all the pain of hair removal because she wants to look well groomed. Let’s take a look into a page from She’s Vanity Dairy who is going on a big date with the love of her life He.

Two days before the Big Day:

She takes a hot steam bath and goes to the saloon for waxing. She hates the painful waxing so She always avoids waxing. But, this time She has to get it done because She is meeting He after a long time and She wants He to feel her warmth of the skin but not the hair on her arms.

She gets her eyebrows done which is again a test to her sensitive skin. Every time She tweezes her eyebrows She has to bear the bumpy red forehead for a day. It’s not only painful but also itchy and irritating. But She has to do it because She wants to look well groomed and neat when She meets He.

Now that we got to know how She grooms before the Big Day, let’s know about He grooms on the the Big Day.

He gets up, bathes, wears an Armani suit and takes off for the Big Day.

Now She and He meets on the Big Day:

She and He planned to go for a Dinner on the Big Day and He comes to pick up She. After meeting She, He greets She with a peck. But neither felt any warmth in the peck. She and He did hesitate for a moment about why they couldn’t feel each other’s warmth, but then brush off the teeny weeny hesitations and head for the Dinner.

Once She and He reach the restaurant, He being the Gentleman gets down, opens the door for She and hold's out his hand. She was immensely moved by this courteous gesture from He and immediately holds He’s hand. There that moment they both felt that warmth and the love they were craving to feel since the moment they met. But then why didn’t they feel it during the peck?

The dinner goes on well and both She and He have a fabulous time. After the dinner they decide to go for a walk on the beach. Holding hands they walk on the beach talking endlessly into the night. Finally the moment came for the Big Kiss but She was disappointed as all She could feel was He’s mustache and beard. Then She understood why She couldn’t feel He during the peck. The culprit BEARD.

She really got disappointed and remembered all the pain she endured during waxing and threading just to look groomed for this Big Day but He didn’t even bother to Shave. She felt it’s so unfair. But, does that mean He doesn’t love her or care for her. He loves her madly and She knows that very well. Then how should She make He realize it without being blunt?

Well we all know women experience similar situations with Men at one point or the other. The reason for a Man’s beard can be either Style or Laziness but women dislike it. How to make your Man shave?

Here are 7 tips to make him shave…