Being a victim of Black Heads myself, finally I got a chance to take my sweet revenge on the blackheads. I am joining the 'Garnier Pure Active ‘Bust Blackheads’ Campaign – Education Through Engagement' through facebook

What's the Campaign?
Well we all know Prevention is always better than Cure. To prevent something we have to know the causes which is not an easy task again. Now who has the time and patience to read rambling articles on blackhead causes? So, Garnier Pure Active Team has designed the digital campaign where we get to know about the blackheads in a fun way and then we can bust them all ;)

Here's what the Team says. Do check out the images they are so funny :D

The Thought:
Get the Blackhead talking! Give an identity to the blackheads and educate the audience through quirky characters, instead of going the usual preachy way. How is that done?
Design characters that are likeable yet have a personality annoying enough for them to eventually die at the hands of the hero the “Blackheads Uprooting Scrub”.  The task is to ensure that when a person sees these characters, he knows they are ‘Black Heads’ in the true sense of the word.
Meet the Blackheads:

Garnier Pure Active has created a fictitious town called Faceville which for obvious reasons resides on your face & the citizens are called Facevillains taking into consideration the damage that they cause to your face. The Facevillians have names characteristic to a blackheads personality.

Blackheads are black spots on the skin. The main reason for its occurrence is oil secretion in the skin which leads to the growth of ugly blackheads. Apart from oil; pollution, sweat, improper personal hygiene, dust, etc are also the other major reasons. Now reading these above 4 lines could probably put you to sleep. So Garnier Pure Active has decided to educate the users through funny comics and situations that occur on Faceville which is the Blackhead world.
In order to engage the users, the brand will be running a series of contests and fun interactive quizzes which allow Fans to be a part of Faceville and interact with them.

Here are a few funny situations: 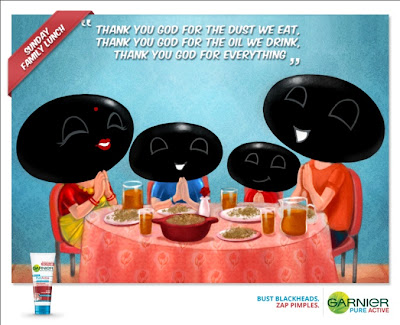 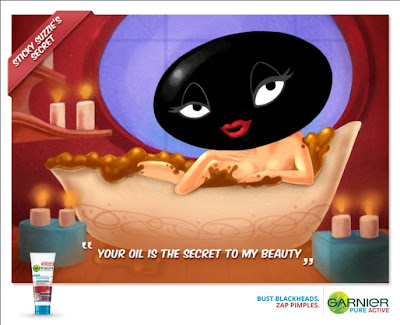 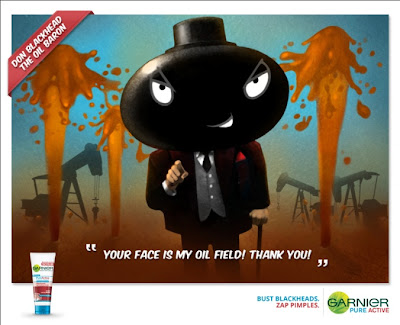 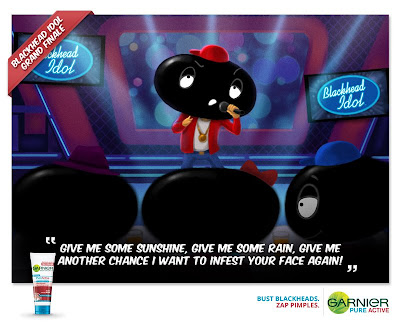 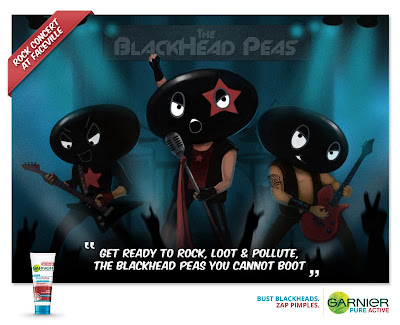 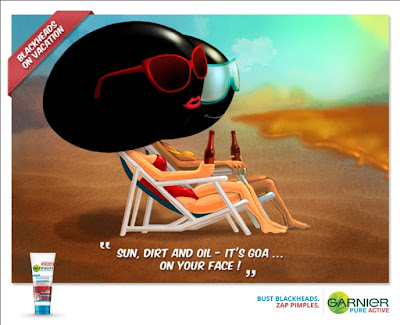 Media:
Facebook being the central hub for the campaign, digital banners across sites such as YouTube, Yahoo, Indiatimes, In.com, IDiva, the Google Network and other niche sites are being used to proliferate the message and generate visibility.
The teasers have consumers guessing who these ‘characters’ really are. The objective is to create intrigue and generate a sense of ‘likeability’ for the design and also communicate that these characters are ‘bad’
Sustenance:
The sustenance phase of the campaign will be revealed in two stages that will educate consumers about blackheads. Apart from being visually stimulating, the campaign focuses on core communication and has strong elements of education and zeroing in on the product truth.
While the campaign will be on for 60 days, it took close to two and a half months to create the characters.
The aim is not only to engage but also to educate. The campaign has generated a lot of interest and people are increasingly talking about the brand.